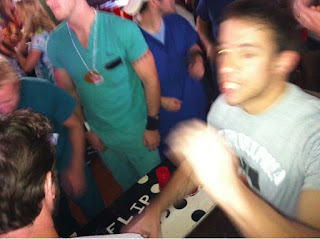 I did another competition this past weekend. And I have to say I'm still a little sore from it. Mostly due to 9 total hours in the car. This competition was fun and I did not have to train for it, much. I joined 4 other friends for a FLIP CUP TOURNAMENT!!! We practiced flipping the night before and we had a pretty good showing. We won our first round 3-2, better then we expected. The second round didn't go so well and we soon found ourselves in the losers bracket and were knocked out in a our 3rd round. Apparently, we peaked early!
There were some teams there that must spend hours a day flipping cups. The team here has won the tournament 4 years in a row and won again this year. If flipping cups were art they'd all be Michelangelo. It seriously was like watching dominoes fall down the line. Bam, bam, bam! If they missed a flip, they only missed once and landed it on the second try. It was something to behold. I, however, am not sure I would want to be known as the best flip cup team ever. I'm satisfied with being mediocre in this.
Posted by CLE Runner at 2:02 PM