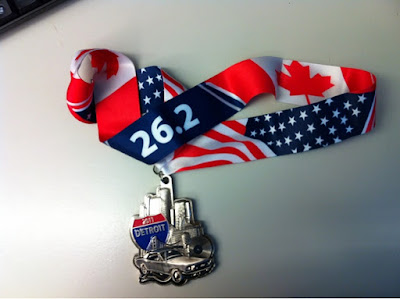 This past Sunday I turned in my V card for marathons. Yes, that's right, I am no longer a 26.2 virgin.

I barely slept the night before. I was up and down several times. Did I set my alarm for the right time? Was it loud enough? Did I accidentally set it to silent? Did I have everything I needed? Of course everything was set right and I was just nervous.

I was ready with plenty of time to chat with other runners in the coral. I spoke with one girl who was so excited that she was going to reward herself with a full stack of vegetarian/organic blueberry pancakes. I told her that I was going to do the same thing but with full on chocolate chip pancakes and a huge glass of milk!

I found my pace group that I planned to stick with for at least the first half, if not the whole thing. The leader was talkative, fun and gave great advice. And who knows, maybe if I had stuck with him I would have done better. But I didn't stick with him. I lost him very early in the run. And by lost, I mean I ran ahead. Something I told myself I would not do.

The first hurdle of the run was to go over the Ambassador Bridge. It's roughly a mile long and has a climb of about 150ft. I ran all of that bad boy! And I didn't go crazy running down it like I normally do. I held back and I was very proud of myself for it.

The next hurdle was the underwater mile! It took place in the tunnel between Canada and Detroit. You go down 150ft and then up 150ft. It's basically like the bridge but under the Detroit river instead of over. And it's way harder. On the bridge you can see the end, you know what's coming. The tunnel is different, you can't see the end until you're right up on it. Also, it's a little claustrophobic. But I made it through with only a very short walk break which is good cause I had to take a pee break as soon as I got out. I think I lost 5 minutes there but I was still on pace.

I stopped once at a first aid station for Vaseline. And it was the best thing to do. I almost want to say it works better then the Glide. Messier, yes, but works longer. 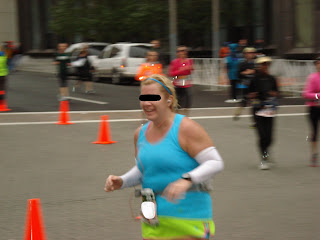 My parents were at the halfway point and it really gave me a boost. I was still on pace and hitting my marks if not ahead of time then on time. But seeing them there really made me light up and I think I had the biggest smile I've ever!

The final hurdle was the mental and physical challenges. It got kind of lonely after the 1/2 marathoners split from the full. There were less people running with you. Less people cheering. But it picked up when we ran through a neighborhood. They actually held parties on their front lawns. Bonfires, DJ's, and at mile 17 one group passed out shots of Miller High Life to the runners. It was the best worst beer I have ever tasted!

I got into trouble around the 20/21 mile mark. I could feel my calf starting to cramp. My knee and hips were aching and if I wasn't scared they would make me throw up I probably would have stopped at another first aid station for Tylenol.

Besides the physical issues I also had mental problems. 20 miles was the longest I had ever gone in training. The last 6 was all new territory. And it was scary. 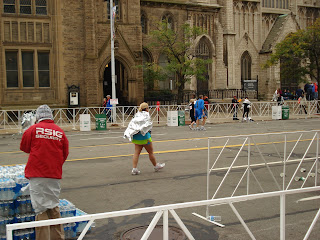 I cried 3 times! At 21, mostly because it had started to rain. It was a brief period but it was just one more thing that made the run difficult. At 24 because my hip and knee were really bothering me and I never thought I was going to make it. I tried to walk it off but it seamed to hurt even more when I made the transition from walk to run but I couldn't keep up running on it. It was really a double edged sword.

I really broke down at the finish. It was a combination of several things. 1. I was finally at the finish, I never thought I'd make it. 2. I saw my parents waiting for me. And 3. I had just finished a huge feat!

I am sure there are a lot more things that happened during this race but I think I've blocked them out. Currently, my quads hurt. My hips are tight. My ankles feel swollen and my calves are sore. Basically, everything hurts! And you might be thinking, "Wow! At least she finished and she can cross it off her list and not think about it anymore." And if I wasn't a masochist you'd be correct. But what's the point of training and only doing one marathon?

The next goal is to have a better time. I came in at 5:31:38. My goal was 4:40-5:00. I'm still happy with my time. I finished and I wasn't last. I don't think I was prepared for how mentally challenging a marathon is. Next time I'll be better prepared. Starting with putting a friend/family member at mile 21. A marathon is not a one person sport. You need a team to get you through and I'm thankful my family is supportive, cause I'm going to need them again in a couple of months. 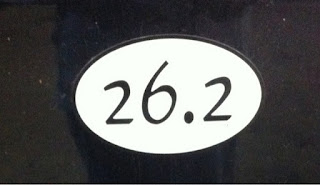 Now that's what I'm talking about :) Congrats love! Hopefully I'll be there with you for the Cleveland marathon!!

Ummm, might not be doing the CLE full. I'm currently in talks with myself for the SD R&R marathon. I can't do both, they're to close. I need to talk to my sister, though. I promised her she could be there for the next one.