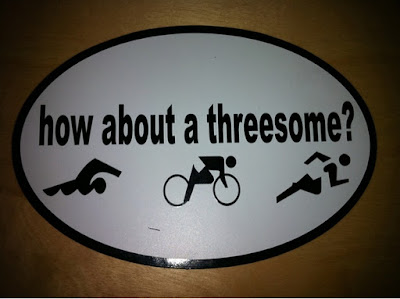 This past August I did my first Triathlon. I had signed up for it at the end of May or early June and had plenty of time to train. I was also training for my first marathon and this would fit in nicely. I decided to do the Sprint division, 0.4mile swim, 16mile bike, 3.1mile run. No problem! I had the run in the bag, I can do 3.1 in my sleep. But I was a little worried about the bike and swim portion. I had never competed in either and hadn't been on a real bike in probably 20 years. This was going to take work.
I borrowed a mountain bike from Jemma and started biking with it. The bike was a Trec and super heavy but it would have to do. It's all I had. I started with a 4 mile ride around the block, slowly working my way up to 10 miles. Biking is completely different then running! I thought my legs were strong from training for the marathon but it turns out only some muscles were strong. Others were weak and needed to be strengthened.

Swimming was different. I already had a community pool around the corner from me and I have purchased a pass for the last 2 years. They have adult swim in the evenings and the pool is equipped with lanes. Again, I started out slow, perfecting my stroke and breathing. I started with 10 lengths of a 25 meter pool and worked up to 40, 40 equals about .6 miles. I had my 3 stroke breathing down and felt strong in the water in the weeks running up to the race.

The pool water that is. The TRI was in open water and I had yet to try swimming in it. Over 4th of July weekend at a cousins cottage I tried open water swimming. It should be easy. I've been swimming in that lake since the age of 6! It wasn't. I don't know if it's that fact that I could see nothing through my goggles or that I had no concept of where land was. I panicked several times and eventually gave up for the day. I tried a couple of days later in a correy by my parents house. The water was clearer and I could see the shore during my swim. I made it through that with out feeling any anxiety. I still knew the real TRI would be very difficult in the harbor on Lake Erie.

The week before the TRI I could do 10 miles on a bike, 0.6miles in the water and definitely had the 3.1mile run. However, it was pointed out to me by some guys I work with, Paul and John, that I had never actually done them in sequence. I hadn't strung then together. Yeah, I could do my bike ride but could I run after?  How would biking and running in mens speedo shorts work?

They had me all hopped up and nervous! I went home that day after work, got all my stuff together, stuffed the bike in the back of my car and hightailed it to the pool in the clothes I wanted to do the TRI in. I did my 30 lengths, jumped out and ran to my car. Once there I pulled out the bike and hit the road. Up until now the furthest I had gone on a bike was 10 miles. Once I reached 10 that day I knew I still had 6 in me, so I pushed on and completed the bike portion at my house. I dropped the bike and ran the 1.5 miles back to the pool to pick up my car. The transition from swim to bike is not that difficult. You mostly use your arms in the swim and your legs are well rested. This does not hold true for the switch from bike to run. On the bike my legs felt great, I thought I still had energy and strength to do the run. However, once I started running my legs turned to jello! I felt slow and wobbly. They cleared up after a mile or so. I had done it! I had strung all three activities together and survived. THE RACE WAS MINE!

The day before the race I was sent into a little panic. My goggles had sprung a leak and I needed new ones. I'm afraid I petrified the poor lifeguard opening the pool that morning. I HAD to try my new goggles and the pool technically wasn't open for another 45 minutes. I don't know if it was because I was a regular or the fear on my face but she let me in to do a couple of laps. I will always be grateful for that. It made the next day that much easier knowing that the new goggles felt good and that I had basically already done the TRI the week before.

The day of the TRI my parents and I went down to the harbor. I left them to set up my transition area and jockey for the best space. Then I had to wait for my wave. That was the hardest part. I just wanted to start. When they let my wave in the water I thought, "Ok, I'm ready for this!" However, they were not. We had to tread water for 4 MINUTES before we could actually start. It was excruciating.   The swim is the hardest. Everyone is in a pack, you can't get around anyone, you have swimmers scratching your feet with their hands and people are unknowingly (I hope) kicking you. I took in a LOT of water but emerged breathless 10 minutes after I started!

The bike and run portion were easy. Yes, there were hills but you made up crazy time going down them on the bike. And, yes, my legs still felt like jello at the start of my run. But if you know what to expect and when it will disappear you can fight through the desire to walk and continue on. The TRI is a lot of work but it is well worth it. I enjoyed the whole 2 hours and I can now brag that I've done one. That is what the pic is. Me bragging on my car. I'm sure I'll get weird looks and probably a few offers but I like it. And I will definitely do the TRI again next year.