Some body got ENGAGED this past weekend!!!

No, no. Not me. Sweet Lord Jesus, preserve me if Whiskey proposed. I'm still not convinced I should be in this relationship. SOOO much baggage and I have a lot of concerns.

Any hoodle! My baby sister!! YAY YAYAYAY!!   I love her choice in a partner and he is completely perfect for her. They actually compliment each other very well. And I'm so happy for them!! Even if it means I have to dance in a pig trough. It's a Family Tradition. I'm pushing for an Italian pig trough. Preferably one in Capri or Florence. It'll soften the blow.

So now Shit Got Real! I need to focus on kicking my sugar addiction. Which really took a hit this week. I did quite a bit of baking for work and I of course had to test it ALL! Get back on the running kick. And SERIOUSLY do my CrossFit. Becuase, while I'm more or less ok with my body, I realize I don't always like myself in pictures. And we all know weddings have a shit ton of pictures. Plus, I have been feeling a bit uncomfortable over the past 3 months and I know it's the 10#s that snuck back after leaving my crossfit gym.

While speaking about sugar....Go see Fed Up. Amazing eye opener!

Posted by CLE Runner at 2:14 PM No comments:

I gave up regular pancakes a loooong time ago. They became rewards for 1/2 marathons. If I did a full I got chocolate chip pancakes. Every once in awhile a carb free version would catch my eye and I'd give it a whirl. But alas....they were terrible. Or messy. Or burnt way to easily.

ENTER "Perfect dairy free, Gluten free, Paleo Pancakes" And guys they are PERFECT!! I was so surprised when I pulled them out of the oven. I changed it up a bit. I hate standing next to an oven flipping pancakes over and over. So, since my oven was already on, I warmed up a cookie sheet with a few dabs of coconut oil on it. I placed 6 scoops of batter on and cooked for about 5 min at 350, flipped, and cooked for another 5 min.

I then made my own blueberry sauce. I mean what good are pancakes with out blueberry sauce. Super easy, 1 pint washed blueberries, 1/2 a cup of water and agave to taste. Let it cook down and you've got delish sauce!!
Posted by CLE Runner at 12:13 PM 1 comment:

You Don't Know My Life! 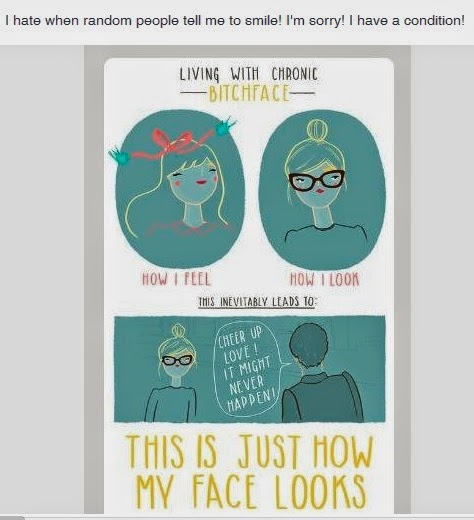 So I started a small debateish thing with some friends on Facebook and learned a little something.
Here's how it went down.

Earlier this week I was running a work errand, thinking about my loooong list of to dos, and walking pretty damn fast. FYI, I'm a fast walker at work, to the point that several people have commented on it. Anyhoodle, as I'm trotting down the side walk some random man tells me to cheer up and smile. Basically, I can't remember his exact words but that's the gist. I smiled and may have laughed but as I walked on and thought more about it the more annoyed I got. Random people, mostly men, are consistently telling me to smile.
SHUT UP!! YOU DON"T KNOW MY LIFE!!

I of course put this on Facebook, sort of making light but also making a point (see above).

And that's when I learned that this is a gray area of sexual harassment, street harassment.
These three articles are most informative, "Smile, Baby" , "Men's Job", "Street Harassment"and the above video is funny.
Posted by CLE Runner at 12:00 PM 1 comment:


FYI, I started this post about a month ago. For various reasons, mostly involving a paper and presentation for my class, it's been unfinished until now. All the points then are still valid points now.

I'm about to have a "Come to Jesus" convo with myself. For sooooo many reasons. Let me list them....
1)Weight: Holy shit people! I'm back to where I started 1.5 years ago. I blame this on a couple of things but mostly my will power. It's been practically non existent since October 2013. I have had very little motivation to run since the RnR 1/2 in October. And my will power to say "no" to pies, cookies, cake....oh chocolate cake...well, I haven't said no to a lot since October either. To combat this I have joined Weight loss for Warriors. I'm only a week or two in so I haven't seen much progress. But the last time I did a challenge it worked out pretty well.

2)Running/Crossfit: As stated above it's been tough. The winter here was terrible and I had a difficult time getting out of bed to run in the FREEZING temps. And, I left my crossfit gym to go it alone at a less expensive regular gym. It's not been going well. I've done some work outs but it's been spotty. I'm hoping since I'm done with my class and the temps are warmer I can jump back in. I've already finished my annual Flying Pig 10K and am using it as a spring board!

3) Whiskey: Oh Dear. We're still dating but I'm just so torn on so many issues. We are complete opposites in almost everything. The ones I'm most concerned with are politics and our parenting styles (should it ever come to that). Sometimes I feel like I'm Chandler and just looking for things to pick at (see first minute of following video). But, then sometimes I feel these are valid issues. Do I have a fear of commitment? Our time lines for things do not line up. No body in his circle except for a few(3) friends knows about me. If he dies, I'll never know! He's not really pushing the separation/divorce. I get that he wants to give his ex time to get her shit together but when he said a possible 2 years I was floored and hopefully made it clear that I probably wouldn't be sticking around for that amount of time. Especially, if I'm still "secret."

4) Whiskey finding out about this site: He made a statement a couple of weeks ago that he googled me and found some sites of mine. I was a bit worried he found this one and pushed to hear what they were. Apparently, just my linkedin, facebook, and researchgate profiles. I suppose that would have been a good time to tell him about this site but until I decide on the question of us being an us I'll just keep it locked away.