I'm back to Crossfit! I've been in 3 times since last Wednesday. The first day back I got a, "Where the hell have you been?" from my coach. He then proceeded to whip me into shape!

It took me 3 days to be able to walk normally after Fridays punishing squat session. I was praying as I walked in this morning I would not have to do much legs. HA! Squats again with wall balls and box jumps! I work on two different floors and am constantly running between them. Today, though, I've periodically taken the elevator.....one damn floor.

I've also signed up for another paleo challenge. The last one worked out pretty well, so I'm excited about this one. It is a little stricter and goes for 8 weeks. The last one of which happens to be when I'm having my tonsils out. I refuse to call it cheating though, if all I can eat is bananas and ground up oatmeal! I did try to buy organic wholesome baby food but they all contain some form of grains! Day one though, so far so good!

My appointment with my ENT was yesterday. It went swimmingly! Both he and his Dr. Sidekick were personable, listened to me, and talked to me as an equal. All things I like in my doctors. It didn't hurt that they were also attractive. Dr. Sidekick especially. At what age is it ok to shamelessly flirt with your doctors? I can totally see me saying, "Oh, your hot. Maybe you should come be my home nurse," or something along those lines while under the anesthesia. When I was discussing my snoring and crap in my tonsils with him I wanted to say, "You know..... I'm single and this really puts a cramp in my dating. If you take them out then YOU are pretty much guaranteed a quiet nights sleep." But I didn't. Don't worry, I have plenty of time to make a display of my attraction. I have to go in 2 more times, not including for surgery, where I will definitely make my intentions known! 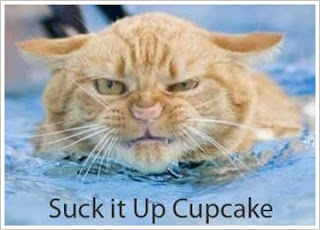 I AM worried about the after care. My sister has volunteered to come help Monday and Tuesday. But, the last time she "took care of me" she let me fall face first into a row of theater seats. IT WAS DAMN FUNNY, though. She just stood there with a look of panic on her face and said, "it all happened so fast!" My mom has already said she's coming for the day of surgery and maybe the day after. But, she still works and can't take too much time off. My father on the other hand, is retired and as surgery will be in November, not playing golf. I will say this. My father is loving and great as............say a handy man, coach, drinking buddy, cat/dog sitter, computer repairer, milk tester, weird noise investigator, car fixer, dad. But he is LOUSY as a nurse. When I was in a wheel chair he was pretty good for a day or two, after that I had to get my own water and JUST
SUCK IT UP! That is actually a philosophy I do adhere to but there is only so much one can suck up and I fear the first 3-4 days is gonna be rough. 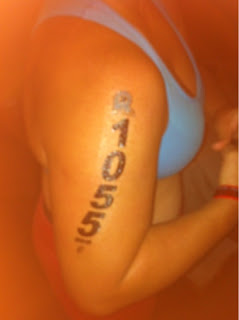 I tried. I did not come to the decision lightly.....It was a long, internal conversation.

I woke up like any other race day. Excited. Ready to make my mark. I was calmer than last 1/2IM. Until I hit the elevator, where someone said, "Did you hear? They moved the swim." I knew they might move it. Hoped they wouldn't. But they did. I understand the move. We had crazy winds and the lake was horrendous with rip currents. The harbor was much calmer. But still! If anyone has raced or done TRIs you know the slightest change in what you expect to happen can change what actually happens.

I had a plan for the swim. It went 1)go to transition and set up. 2)walk to swim start (outside my hotel) 3)hand my clothes off to my mom 3)get into my wetsuit 4)swim to T1. Instead, I set up my transition left my sweatpants at T1, walked the 0.6miles to the new swim start, wait the 1.5 hours till my wave, toss my sweatshirt in the trash, struggle into my wetsuit, and start my swim. Which did not go well. It felt harder than any swim I've ever done. I had to stop and help another swimmer get assistance. And I took in a lot of water (I hope I get another tonsil infection just in time for the ENT). Once I got out I had to find my FLIPFLOPS!! and run the 0.6miles back to T1 with a wetsuit that weighed 8xs heavier.
Swim:56:07 T1: 13:33 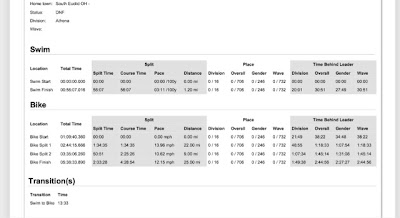 Then I had to bike. I thought I was doing really well at mile 10. For some reason I thought I had done 10 miles in 20min. I thought I was going to be a rockstar after doing the math and realizing I would be done in 2hours. And then I REALLY looked at my watch and realized it was 10miles in 40min. And that's with the 15mph wind at my back! At mile 25 I thought I was done. I was ready to give up. But then there was this aid station at mile 30 with rice krispy treats and I thought, "Laura, quit talking crazy! Of course you're going to finish this!" But then I got foot cramps. Like crazy. I had to get off 3 times to flatten out my feet and give them a bit of a rest. Bike: 4:28:54

When I finally made it back to T2, I dismounted and had a sharp pain in my left hip. I had to make a decision. Continue or not. I took all my bike gear off and changed into my run gear. I walked around T2 for a minute or two, watching runners come in and runners go out. My feet still hurt as did my hip. I then sat down took off my chip and cried as I handed it to an official saying I was taking a DNF. 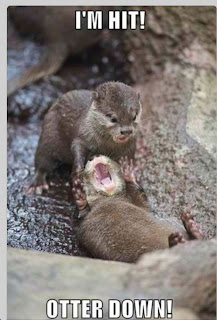 I know that had this summer been like last summer I would have powered through. I would have had the mental stamina to push myself and talk myself into continuing. Had my training been there, I would have a new medal.

We are 48hrs away from the start of the 1/2IM. And, oddly, I'm not panicking. Yeah, I'm kind of worried. I know I can't change anything. I could back out but I'd rather die or crawl to the finish than do that. I'd even settle for a DNF (did not finish) before a DNS (did not start).

Also, I've been seeing this guy.....well, seeing is an over statement. It's been a week and we've gone out 3 times. Which is crazy for me! I'd like it to last a bit (if not longer). I've yet to find an annoying habit. We've eaten together and he doesn't hum. He has all his teeth, a good job, education, a house. He's kind to animals, liberal. Basically, he's FUCKING perfect. Which scares the shit out of me. I don't remember how to do the casual dating thing with a guy I like. Usually, I just jump into relationship mode but I think I need to take it slower with this one. Also, what if he's seeing someone else? This is a complete possibility since we met through online dating and that's all a numbers game. When do you have that convo?

I'm sort of feeling him out on short/long term dating. I asked about a date two weeks from now. It involves tickets and a small amount of commitment. He's going to get back to me on it.