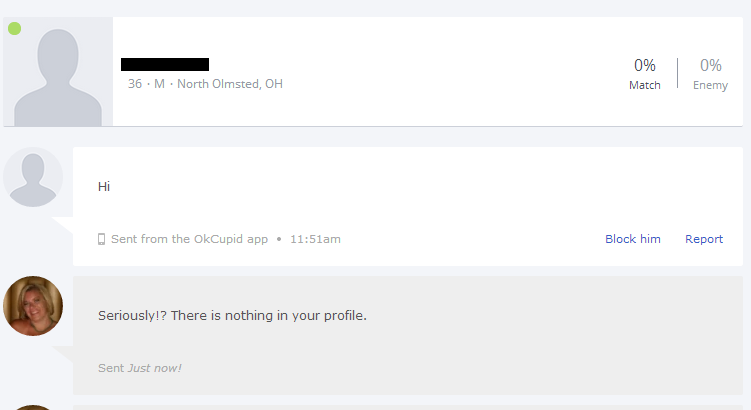 Honestly, how does he think I'm going to reply? There is absolutely nothing in his profile except that he's straight, online, 36, and lives in North Olmstead. Not even a pic!

After posting, I remembered an NPR talk yesterday about how OKcupid runs experiments on it's members. Maybe this one of them? To see if some one will respond to a COMPLETELY empty profile.
Posted by CLE Runner at 2:59 PM 2 comments:

It hurts to walk. To jump rope. Sometimes it just hurts sitting in a chair.

I therefore made two appointments. One is with an orthopedic that specializes in sports injuries of the feet and ankles. Her CV is actually pretty amazing and I'm really hopeful she'll understand my need to run soon and what's going on with me. I don't get to see her until mid August, though.


My second appointment was with my chiropractor. Admittedly, I made the appointment just to get my shit in line but it turns out he may be able to help with the whole heel thing. As I was laying on the table telling him about my heel he said that my rt hip is higher than my left. And damned if he wasn't right. My feet hung off the table and I could feel where it hit on each foot. On my right it was at the ankle and on my left it was about an inch lower on the foot. I never noticed before because I'm so short my feet RARELY hang over.
Posted by CLE Runner at 7:01 PM 2 comments:

So this guy, we'll call him Jared, has emailed me every time I resign up with a dating site. I don't know how he finds me but he does. I've always politely declined or just ignored him. But I haven't had much success with the guys I've been dating so far, so I decided to give him a chance.

Email with him was a little annoying as was texting, so I bit the bullet and asked to meet to see if it would change anything. It did not. He constantly talked about nothing and held the last two bites of his burger in his hand for 20 min as he yammered. I just wanted to scream,"Eat your fucking burger so I can go!!" I would have gotten another drink but I didn't want to be there for more than I needed to be. When the check came I just handed him a $20 which was way more than I needed to give but I didn't want to wait for change. I told him to just keep it and put the overage towards the tip. He got confused, paid the whole bill with his card and put the $20 in as tip. There was an awkward hug at the end and I beat a hasty retreat!
This is what followed along with the time stamp from my phone.

You know it's bad when you call your mother and tell her "if something happens check this guy out." 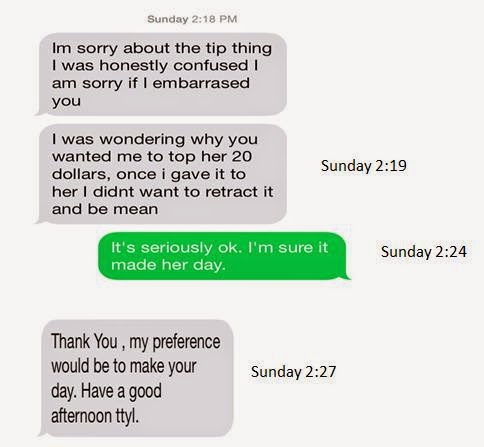 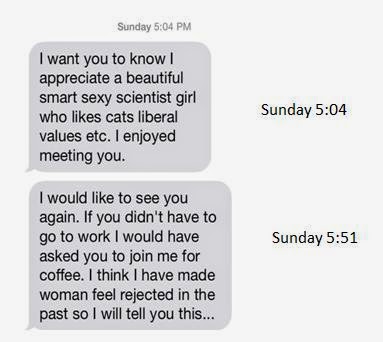 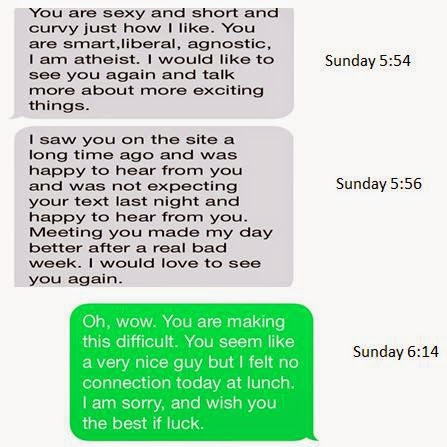 I don't understand how my lack of height is a positive? 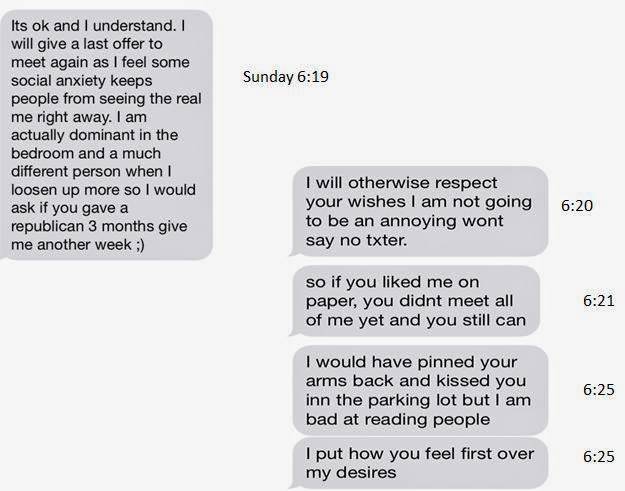 No. No, you read me right. I would have punched him!
I decided not to answer thinking if I did it would have only encouraged him. 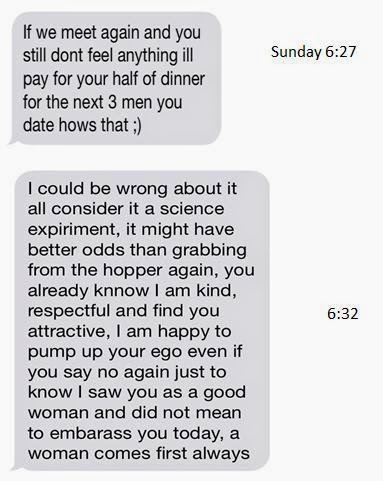 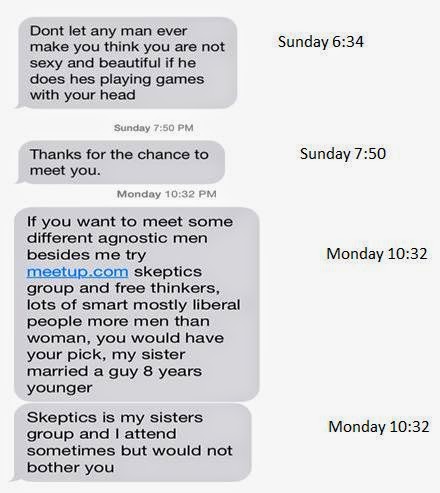 OMG, I can't believe I did this! 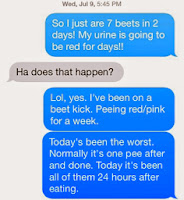 So over the past couple of weeks I've been eating this delicious beet salad. The beets are roasted and then served cold with candied nuts (pine nuts were great but so were walnuts and pecans), goat cheese and a little balsamic vinegar. It's heaven on your tongue. However, there is a side effect to eating a ton of beets. I felt I should share this with my sister.
When she responded "does that happen" I was admittedly, a little confused. I remember my mother telling us the story of an aunt's first experience with beets. 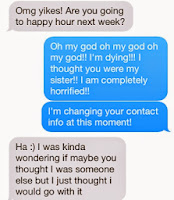 And then I realized my mistake when she asked if I was going to happy hour. How would my sister know my work friends were doing a happy hour? 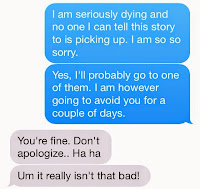 I SENT THE TEXT TO SOMEONE WITH THE SAME FIRST NAME AS MY SISTER AND SHE WORKS WITH ME!! 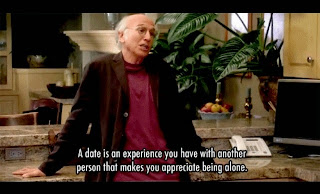 In the past when I've done online dating I've told my mom where, when and who and then promptly called or emailed after. It's a good system if nothing happens. It's a bad system if something does. She might not decide something's happened until 3hours after that something occurred. Or even 12. By that time I could be dismembered and at the bottom of Lake Erie (I've been binge watching Dexter).

Consequently, I found this awesome service from KITESTRING. You sign up, put in your In Case of Emergency person, and your phone number. They then text you from a number that will onl
y be given to you. When you go out you send a text to that number with "2hr" and the company will text you in 2 hours. At that point you can give your "all clear signal" or extend the time.

HOWEVER!!! Should you fail to extend your time or give the all clear it sends a message to your ICE. Or, in my case my 3 ICEs. There is also a distress signal, should you need it. 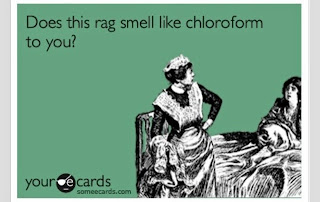 This is all background for what went down yesterday. I went out on my first newly single date last night and used Kitestring. I also gave my mother all the info she would need. I set my account to check in on me in two hours and went on the date. It was not a great begining and an even worse end. But, I had nothing but time and had been sitting around my house all day. And I like dirty martinis. The convos aren't important but it was clear it wasn't going to go anywhere. 15min prior to my check in I extended it an hour. Then the dude and I got into a heated political debate and I paid the bill and put all my shit, including my phone, in my purse.

Side note on the bill: Dude didn't even offer to pay or give to the check. Even when I don't want to pay I still at least offer. Not this guy. I at least made up for a lot of the free drinks I've gotten in the past.

Ok, back to the story. I realize that I've been there for awhile and should probably extend my check in by at least 20min. When I pulled my phone out I had 5 missed calls, one voice mail and a text from Kitestring telling me I've missed checkin and that my ICEs have been informed. I MISSED IT BY 15MIN!!! 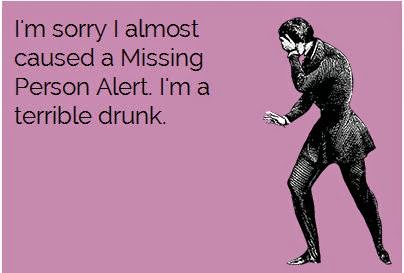 I tried calling my mom and sister but it wouldn't connect. I then texted but continued to call. I finally got in to my sister and told her to call my mom, who then promptly called me. I believe I may also have been paged at the bar but I'm not sure. On the upside, I know the system works.

In the chaos the dude disappeared, apparently to the bathroom. When he came back he told me how rude I was and it did not get better when I explained about the service and what had happened. I think he was hurt that I felt the need to take such precautions. He seemed angry and said he needed to leave and get a cigarette. What I don't understand is why wouldn't everyone, even guys, use this?  They're just as vulnerable as us, especially when alcohol or drugs are used to sedate them.

To top it off I ended up walking back to my car barefoot. One of my shoes broke shortly after leaving the bar and in the process  twisted my ankle. I suppose it's a plus that I didn't step on glass.

If Not Here, Than Where?

I have almost always been political. Well, since I could vote. Ish. Like most things my political views did not form solidly until college. I've always leaned left but am now firmly as far left as possible. In fact, I was once told I was "so far left as to be in Stalin's back yard." It was one of those online quizzes.

But, now that I'm done with school. Have a great career started. A house and all my basic needs met. Now, the question becomes how willing am I to work for political aims?

Up until last week I really only read articles, reposted to FB, put my two cents in on some posts, signed petitions or donated and I of course vote. I even made my mother drive me to my voting spot the day after my tonsillectomy so that I could vote.

But times they are a changing. I was so angry with SCOTUS for the HOBBY LOBBY ruling. And then what they did the next day in allowing it to be EXPANDED to all birth control and other for profit corporations. I was so fired up last week that when planned Parenthood called I volunteered to make phone calls informing people who had donated in the past about the SCOTUS ruling and then what they could do to help in the fight. It was a little scary, especially after the first person I talked to yelled at me and told me I was lying. I wanted to argue but wasn't really allowed. Plus, it might cost them money. I had several really good ones. And a whole bunch of no answers.

I plan on being a lot more active in the future. Particularly with woman's rights.