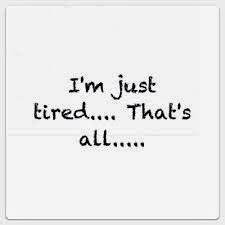 I am so sore and tired!
How sore and tired, you ask?
So sore and tired that when I fell onto my bed while removing my clothes I just laid there for a good five minutes before moving. Even my side boob hurts. Which I suppose means it's actually muscle and not fat. Or rather muscle under it all.

I had hoped to run this morning but sleep seemed a better option. I have to say I have not been running in a very long time and it saddens me. I realize that it's just me holding me back but I can't get out of the bed. It was super cold and now I'm sore and tired from Crossfit. I have decided to sign up for the Flying Pig 10K and am hoping it kicks my butt into gear!

FYI! I wrote this Tuesday and am posting it on Thursday! So tired.
Posted by CLE Runner at 1:15 PM 2 comments:

I Think This Says Something

This Friday marks 4 weeks with Josh and things seem to be going well. There are a couple of weird things but I'm hoping to break him of them.

One that I brought up to you all last week was the way he holds his fork. You guys, I didn't even say anything but he brought it up himself and said he was trying to "stop eating like a barbarian." he then promptly picked up his fork and proceded to eat like said barbarian. DIDN'T LAST LONG DUDE!

The other is....he sleeps fully clothed, He stayed over last Friday after a late night out and he slept fully clothed. Jeans. Tshirt under a sweatshirt. FULLY CLOTHED! Maybe it's cause he didn't have pjs. Or, he just wasn't that comfortable. I don't know but it is definitely something I will keep an eye on.

I FORGOT HOW TERRIBLY MUCH IT HURTS!!! 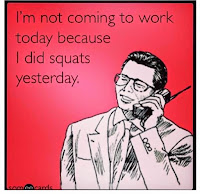 But it's a good hurt, I suppose. Monday was a shit ton of squats. Back squats, front squats, over head squats. I was mostly ok Monday after but holy shit Tuesday was rough. My lab is split between two floors and I spend most of my time on one with occasional time on the other. But yesterday I had to keep  running back and forth between the two and my phone says I did 14 flights!! 14!!
This morning I was starting to feel better. Yoga and the foam roller yesterday really seemed to help.

AND THEN WE DID DEADLIFTS!
I've had my legs buckle multiple times at work today, just walking along. So embarrassing.

Needless to say my quads still ache. I may be in need of an ice bath.
Posted by CLE Runner at 2:09 PM No comments:

I've been dating Joshua for about 2-3 weeks now. We've been on 4 dates and they've been really good. I really only have two things that bug me:

1) He talks and talks and talks and talks. To the point that I'm done with my dinner and he's barely touched his. Which is fine, I'll just sit here and drink my wine while you eat and chatter at me. I've dealt with it for 36 years with my mom and 34 with my sister. I've had a lot of practice.

2) He holds his fork like a barbarian! He's 37 and I'm not sure I will be able to change that but I suppose I could just not look at his hands when he eats.

On the plus side, at least he doesn't hum when he eats. I never thought that would be criteria but HOLY HELL that shit is annoying. 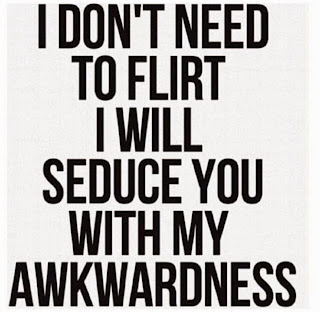 This past Saturday we went to a local Jewish museum and then dinner. The museum was quite interesting, if a bit cold. While there I ran into someone I worked with. And SERIOUSLY! it took me 5 minutes to introduce him because as I'm making conversation with my work pal I'm thinking in my head,
"Ok, you have to introduce him. Do we say friend? Boy friend? Date? HOLY FUCK, what's his name? Jeff? No, no, it is a J name. John? Wait! It's Josh. Yes! Do it now! Introduce him."

It was a huge moment of panic. And, don't get me wrong, I completely know his name, it was just being put on the spot and being the first time I've had to introduce him to someone.

But I think it wasn't noticed cause we went to dinner and then made out for a couple of hours.
The date was almost 12 hours long!! Who does that on the 4th date? It's practically a whole day. I'm not complaining, it was fun and nice. But I don't think I've ever had a 12 hour date this early.

I also had a small moment of panic when he said, "I googled you and I found a page about you." I thought he had found this blog but no. He actually found a science site that keeps track of my papers. But my thought was why tell me this? I don't tell guys I google them or look on FB for them. Just be cool, pretend you don't know I'm a "famous" scientist, and act surprised when I show you my mind blowing papers.