(Originally written 4/19/13)
I've been told I'm like a man in relationships. Sure, I wear heals and pretty undergarments, but for the most part like a man. Not big on cuddling. Public displays. And, apparently, the big one in this current "thing", not a big feeling sharer.

Based on last nights drunk texts with Mark6.0 and today's dissection of them with a friend, it's been decided that I need to resign myself to being the dude in most relationships. And that I just need to roll with the "needy" aspects, if I like this guy. Which, I do.

He voices his feeling on how attractive he finds me. It's nice but sometimes I feel awkward. I don't voice my feeling about him. My opinion is, "if I'm with you then obviously I find you attractive." I figured it was an unwritten rule and everybody knows it. Apparently, not.

Yes, I do miss him. We haven't spoken to each other, other than text, in almost a week. I really didn't think I had to say it. I repeatedly asked when he was coming back in town (he's currently in NC) and if we were still on for our date. After only two dates I'm not really going to say, "I miss you." It's not my style. 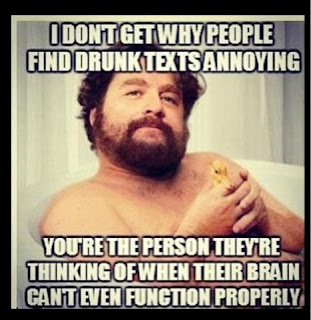 I am working on being a little more forth coming on my feelings.

Performing CPR on a Loved One 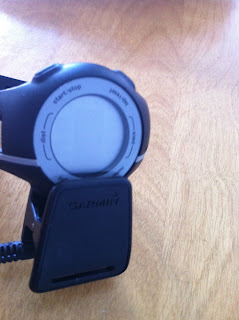 Ok, that title is a bit misleading. I'm sorry, but I may have lost a training partner that's been there for me for two years. Never complaining. Always taking the beating.

My original plan for this post was to talk about my 17 mile run this weekend and show you a pic of my Garmin screen with distance and time. When I went to take the pic this morning the screen was completely blank! I had hoped it was just a dead battery but when I plugged it in the screen remained blank. I have two more things to try when I get home, holding the "light" button for 6sec, or replacing the battery. If neither of those work I'm going to have to spring for a new one. BOO!! If that's the case it sucks on two levels. 1) Money. 2) I haven't synced it to my computer in quite sometime. I'll lose all that training info.

17 mile run was good, all in all. First 5 miles went fast, 10:40-10:50 pace. The next 8 were decent, normal training pace. Felt great. Knew I had the marathon in the bag! The last 4 left doubts. Probably took almost an hour to finish them. Lots of walking, quads screaming. I'm still sore today. I'll still go out for a 20 this weekend.

Now on to new things. I've gone out on two dates with a new Mark. For now we'll refer to him as Mark6.0. So far, he seems like a keeper. I have fun when I'm with him and I actually enjoy taking on the phone with him! That really hasn't been the case in a loooong time. It seems like this one may stick (at least for a bit more than 2/3 dates). We've set up a third date and have discussed things we would like to do well into August (WHAT??). Honestly, I feel as though we've been dating for a couple of months now. It's been that easy. And, he wants to join me for part of this Saturdays 20 miler. He's not up to more than 5, though.

He did throw me for a loop this past Saturday. Sitting at the bar he informed me that he wanted to "take the relationship to the next level." I seriously panicked. It's two dates! What next level is there?!
Just as I was about to order a shot for some liquid courage he said he'd like to be Facebook friends. Still, slightly panic inducing but much more doable than say, taking a trip together or meeting parents (which truthfully was also talked about.) I think he's starting to get that I have a few commitment issues but so far he's given me my space on them. I'll probably FB friend him.
Posted by CLE Runner at 10:23 AM No comments:

I had a hard time getting out of bed this morning. It was colder than I expected and I had a late date night before. More on that later. Plus, when you have 15 miles in front of you, it's a bit daunting.

The first 4 miles were rough and I wasn't sure I would make it. But the next 6 were cake! I felt strong and ran well. The final 4 were not so cake like. It was a head wind and I started to develop a blister on the arch of my right foot. But I finished!!

I realized my love of water at about mile 12. I took a pull off if my water bottle at it was like baby angles! Also, shout out to Tropical Smoothie Cafe on Euclid for the free water bottle fill up! I hate having to buy a bottled water just to fill up my bottle 1/2 way through a run. I will have to remember to stop there again.
Posted by CLE Runner at 6:05 PM No comments: