I got hit on by a girl today. It was the sweetest and nicest come on I've ever had. And, when I informed her that I was very straight she took the rejection with class and told me to look her up if I ever wanted to explore. Kind of makes me think being a lesbian might be easier but I assume there are creeps no matter your orientation.  But after last week it really was a breath of fresh air.

Posted by CLE Runner at 8:08 PM No comments:

I Have No More Fucks to Give

It has been a trying week. Mostly on the guy front. 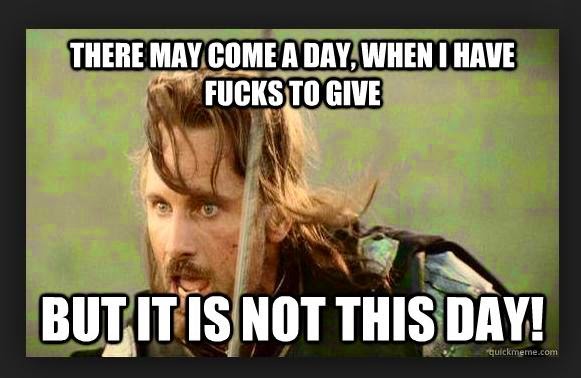 I've been propositioned by a much younger boy, which admittedly, I'd be open to picking up a booty call but I have a system. Meet in public first and then go from there. If I can't stand your voice or I get the "creep" vibe we're all good in public. But blindly inviting yourself over with out meeting is cray cray. The convo didn't go past me saying a bar would be more appropriate.

I've been called a cunt. I canceled a first date with a guy I was on the fence with to begin with. Then was turned off by the conversation with him. Then he actually answered some online questions which showed we were complete opposites and had nothing in common. He felt that opposites attract and I felt that if that were true I'd still be with the conservative lawyer. I apparently am shallow for wanting things in common and not the fact that there's a physical attraction.

I've been called fat. If that were true why would you even contact me to begin with? I handle rejection with aplomb. Is it so much to ask that the others do too?

One at a time over time I can handle. All at once and it's just a bit too much.