I've been sitting on this post for awhile but with radio spots, dating and training, writing it has been on the back burner. 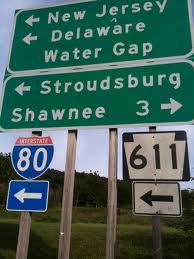 I've officially signed up for the Pocono's Half Iron Man. I'm super excited for it and extremely terrified all at once. This will be the second year that the Iron Man competition has held a triathlon in Stroudsburg, PA. It's a qualifier for the world 1/2 Iron Man championships in Las Vegas and while I don't think my time will be great you never know what could happen.

While shopping around for a 1/2IM  to do I thought the Muncie, IN would be ideal. The problem though, is that I have no idea how these are run and what the set up is. I, therefore, will be volunteering at this 1/2IM to get a feel for the race and to calm my anxiety a little.

When I chose my race I knew I wanted something in the fall. It won't be too hot nor too cold. I wanted something about a month after my short distance TRIs and I wanted I freshwater swim. I don't suppose biking and running with a salt crusted body would be all that great. These parameters left me with several options, Branson, MO, Augusta, GA, Austin TX, or Stroudsburg, PA. I ruled out Austin, too far and I didn't want to deal with shipping my bike. The others were a bit of a drive and I honestly could have done any of them. I settled on Stroudsburg simply because it was closest to me. The bike routes were equally hilly in all of them. The run route, although, seemed a more flat in Stroudsburg. And, let's face it, that's when you want go easy. What sold it really was that the swim in Stroudsburg went with the current. I could potentially gain minutes there. POCONO'S it is then!

After signing up I discovered that the swim was canceled for the first race due to an elevated river and strong currents. They also then did the bike portion as a time trial and the whole race was extremely short. Well, compared to the 70.3 it was supposed to be. I'm hopeful this year will be a full course and will be prepared to ride the hell out of some hills.

One thing I am sad about is that I will be unable to the Akron Half Marathon. They have the best expo and it's a great race. Plus, it was a measuring stick to see my running progress!
Posted by CLE Runner at 9:43 AM