Yesterday's radio interview went well. Or, at least at first glance. After the interview Jason called and asked about meeting up for dinner this Saturday. One of his favorite places to eat is the Cheesecake Factory, which happens to be near my house. I like it but it's not a favorite. I would much rather hit up a hole in the wall that served THE best chicken tikka masala in all of Cleveland. But, they do have a great Thai chicken pasta. I was stoked!

Until I got an email from Stan that included an mp3 file of the interview (I'm not going to post it here as it contains actual names). It's roughly 81/2 minutes long and I sound amazing!! Jason comes off a little dead but not terrible. The first 7 minutes is great and it sounds like everything is going well between us. However, at 6:50 the host hangs up with me and as I'm not listening to the actual show I thought that was it. It was not. He kept Jason on the line and asked "We have to know! She sounds HOT. Is she hot?" There are two options here.

1) LIE Say I'm the hottest piece of ass you've ever seen. I know your lying but no one else does.

2) BE HONEST Say I'm attractive and with piercing blue eyes. Above average on the cute scale.

Apparently, there was an unknown third option, to joke. And Jason went that route. His reply, "It sounds like a lot of work Tony." It stumped the host, who replied "What's a lot of work?" Jason came back with "No, no, it's good."

HUH!?!?! He uses that line a lot. Saturday, I was talking about running 9 miles and he said it. He's said it repeatedly over the course of the last couple of days. But I don't get it. Is it a defense mechanism? Like you know you need to say something but don't have anything clever? 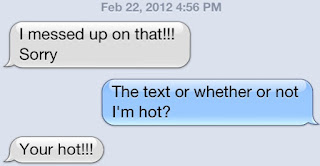 I just have to remind myself of the short term goals. Mostly, a date to a wedding. Also, it's just nice to have someone hold your hand and say good night to (wink wink). I realize this will never last long. First, he's leaving in about a year to go back to Afghanistan. Second, he's not that intellectually stimulating. And I just don't see it. 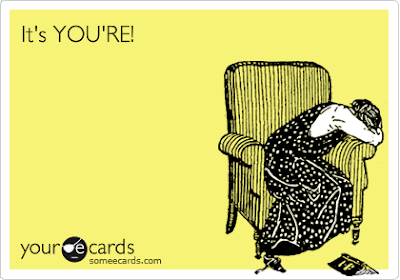