It's been a rough time dating.  Eleven weekends have passed since Tex and I ended things at the close of May. And, my schedule this summer has been CRAZY!! Of those 11 weekends I have only been in town and free for 3! Between birthdays, white water rafting, vacations and races, I haven't had a whole lot of time/energy to put into dating. Honestly, I've been so tired and pressed for time that I've been doing "beach" hair for work/life! Also, I'm a little jaded towards dating and have therefore put little effort into it. I'll go on my dating sites, look at my matches and express some lack luster interest. Usually, with a wink or a little flirt option. Rarely, do I send a first email anymore. Some of this stems from my busy schedule but some of it stems from the lack of decent choices. As one friend said, "You've gone out with almost every Dbag in Cleveland!" 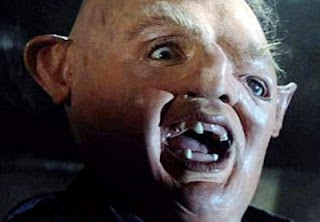 In those 11 weekends I have gone out on 5 first dates. There was Hot Cop. He was hot but "Dicky." Trusty Dan, boring. Josh, actually not really sure what happened here. I think we both got distracted. And most recently a guy I nicknamed Sloth and Slightly Trusty Keith2. All of these guys made the first moves and SLK2 is driving the "relationship."

Sloth. I know, I will come off as rather mean but it was the first thing that popped into my head when he walked into the bar. We all know that you should use the best possible pictures in your profile. Some take advantage of this more then others, see Toothless guy. Sloth had really great pics. He was a runner, almost divorced, and had a career/education. But in person......his face was asymmetrical. This probably bothers me more than the next person. I once proved to my mother that the ceiling above the stairs was longer on one side than the other. BY 1/8 OF AN INCH! It still drives me batty to this day! He's cute and nice, if you can get past the lack of symmetry. But once I see something, I can't unsee it! See, Jamal, in "Whiners are Wieners." He was also still a little bitter over his divorce and didn't seem to quite be ready to date again. I then phased him out.

Slightly Trusty Keith 2 reminds me obviously of Trusty Keith. Also, a little like Ross/Russ, in that he takes long pauses.Talking to him on the phone sometimes is like pulling teeth. It takes awhile for him to spit out his words. He got the "Slightly" when he went in for the kiss on the first date. Trusty Keith was very slow to make a move. They're roughly the same age and both have boring to me jobs. We've been on 3 dates now and I have to say so far so good. He did seem a little weirded out when I asked what his last name was. Like, at 3 dates I don't need to know that. I'm weirded out that it's taken 3 dates to get his last name!! But I have it now and nothing bad has popped up in the stalk. He does have Fox News listed as an interest, but he also has Jon Stewart and the Daily Show listed. I like to think he is just keeping tabs on the enemy. I know he leans a little to the left on some issues, I hope over time to find that he leans far left as I do. He is driving this relationship and I rather like it. He calls, he texts, and he asks about another date before I do. I loved being the Hunter but it hasn't gotten me very far. I'll try the hunted for a bit.
Posted by CLE Runner at 3:10 PM